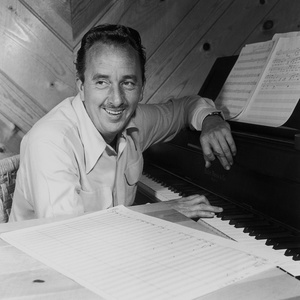 Gordon Jenkins enjoyed sizable fame as an arranger, conductor, composer, and bandleader from the 30s through the 60s. He began as a multi-instrumentalist freelancing on radio, then became a prolific arranger, contributing to sessions by Isham Jones, Benny Goodman, Lennie Hayton, and others. He conducted The Show Is On in 1935 on Broadway. After a stint with Paramount, he worked for NBC in Hollywood from 1938-1944 and was Dick Haymess arranger for four years after that. He became the managing director for Decca and had several hits for the label in the late 40s and 50s. Hes noted for spotting the Weavers folk group in the Village Vanguard in the early 50s, getting them a recording session and later backing them. He supported other stars such as Louis Armstrong, the Andrews Sisters, and Haymes in the 50s. Later he was Judy Garlands conductor for an English concert, and then Nat King Coles arranger and conductor for a time. Jenkins won a Grammy in 1967 for the Frank Sinatra album September of My Years.

Views from the Manhattan Tower2020年5月22日