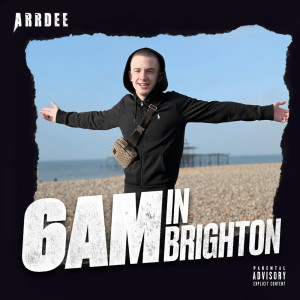 6am in Brighton Lyrics

It's my time now and it's happening

Me? I'm just one seaside boy who sat in his ding dong rapping

Quarter mill' in a week and all I'm doing is being me, I ain't acting

Now the gal come over nights, it's a mad ting

But I've still got bubble wrap on my windows, my heating's faulty

I won't change 1Time for the clout

Same way I still get my vids off Cauty

I'm with the same friends from school

True, we got kicked out, the young boys were naughty

We roll up to the shubs, get jiggy

Broski said, "You've done it for really", I said, "Bruv, don't be silly

Just 'cause you hear me on radio

Get a big bag of chips and link with a chick

Not rich, but I'm still with Millie

I think 'cause I'm five-foot-six

She's gon' be surprised at the sight of my big-

Tss-ha, slim waist and I know she knows how to use it

She said, "I knew you before music, I don't want you to think I'm some groupie"

Such a cutie and I don't believe her, but it don't make no difference

Give a fuck why you here as long you're fit

And it's clear that I'm gonna be hittin'

See, I got a mission and I'm on my way to complete it

I don't care for the dead sneak dissin'

Nothing could stop me, trust me, I mean it

Lick the plate, clean it, my hunger's still there, I'm still fiendin'

For the spotlight, young but I ain't got time, I want it now and I need it

Uh, just had a fuck off phone call with YK for an hour

He said, "Mashallah, my brother, you deserve this now, it's in your power"

It weren't that long ago when I had no hot water, I couldn't use my shower

So I don't know why the fuck man are making rumors up, you look sour

Baddie in my peripheral, with her batty all big in my visual

But my chattings, it failed so miserable

'Cause she said that I'm chavy and typical

Typical, when I get my bag, bet I'll pick 'em all

And it's true, but I don't give a monkey's

I do what I want, when I want, have fun and that's why love me

Cheeky chappy 'bout to make it rapping, am I dreaming? Punch me

There's drugs and bandos too 'round here

I ain't cappin' about my fuckery

When your olders short on bread

Why the fuck do you think he sends you country?

You muppet, don't tell me what I've done, bruv, shut it

I seen things that you spew in a bucket

You prick, why you think when I drink I chug it?

Boy, I love it, why? 'Cause all that shit made me who I am

I don't think they understand

This weren't no accident, bruv, this was the plan

I feel like Kevin and Perry, got gal in my DMs screaming, "Shag me"

Not your average rapper thinkin' he's the dog's bollocks

I love you a lot and I'm chatty

Nah, the views won't change me, seaside made me, boy, I'm so wavy

So I cut out anything snakey

Stopped all the blazin', tried to stop ravin'

But I fucking love misbehavin'

Some things I just can't change, but that's cool, haha

But it's my time now and it's happening, for really