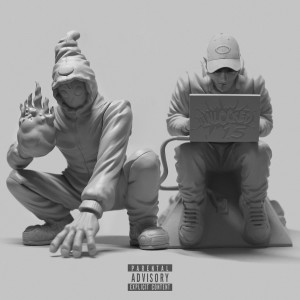 X the middleman, no Malcolm

Where's the Talcum? Powder, when I smack niggas

Battle the strategist, it's just a game of battleship

Nayvadius, the futuristic version of an avid kid

Actavis, everybody lean on me

Got them bags full of goodies like I'm CeeLo Green

Who the fuck tryna mob out?

I been on my job, no need to call out

Turn your crib into a game of Fallout

You put me in the water, bet I crawl out

Alligator swag, can't do with the navigator swag (Indirection)

Viewer discretion upon my beat selection

You camе with aggression, now your neck gon' need protection

Make it rain on the bitch, that's how you water hoes

Make it rain with the clip for those that all oppose

Put they face in the box inside a centerfold

Zeltron out the barrio, cold as Ontario

I am the oracle, I been know what's in store for you

Big angel in the projects, the greatest prospect

Forties a four on four, up

Homie's a ho', this home up

Four feet and swore he grown up

Patrol the whole three with no leash on us

My little woadie, go Broly on anyone that show up

The fuck is you talkin' 'bout?

The angel dog is out

Ain't shit to blog about

Oh wait, that's right, you got a lot of mouth

With your own cottonmouth

Duckin' smoke, he know the firehouse

Okay, I got another route you could go

Like we tryna leave out the house, what are those?

Mhm, get up slow

Mhm, deal a gun big enough to give us some hope

I hope he quick enough

Especially when this .38 special, suggest it's best we split

Don't make me let it spit, promise his head'll split

Promise his kept messy, nigga, don't mess with this

She said she want it from behind, I told her, "No shit"

She said she wanna sixty-nine, I told her, "Don't snitch"

She said, "Kenny, you got that fire, can you toast these–"