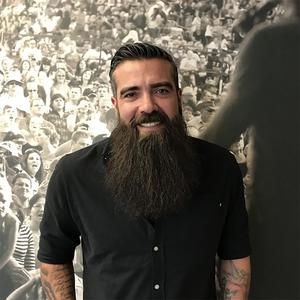 Jo Black, born Jo Engelbrecht grew up in Pretoria North and started working after school. He ran his own construction company where, for approximately 8 years, he built everything from roads and bridges, to hospitals and houses. Jo soon realised that there is more to life than just work, and things took an about turn. Wanting to empower people to be the best version of themselves, Jo launched the Be that Guy movement. The movement took off instantly, fast becoming an overnight success. Jo has delivered his uplifting, inspirational talks at venues throughout South Africa. Jo touches hearts, and minds, and has become somewhat of a phenomenon with his signature brand of positive thinking. Jo believes that Be That Guy is what society needs… a movement for positive change. A movement that encourages people to care, to look out for each other, and the help create the change that they want to see in the world. The Be That Guys Roadshow has visited over 100 schools across the country, where Jo Black has empowered children to nurture the good within. The show is approximately 45 minutes, and ideal for high schools, universities, churches and mens groups. There is also a version for the ladies: Be That Girl! However, there is more to this artist that just motivational speaking. Jo’s music career took flight in 2017 and has been a raging success ever since. The bearded man became the symbol of hope and high on public demand, he performed more than 300 shows in 2017. His debut album ‘Skepe’ took the industry by storm and got honoured with a record number of KykNET Ghoema awards; these seven award included Best Newcomer, Best Album of the year, Best digital seller of the year, just to name a few. His three music videos have reached more than 5,4 million views on Youtube and he also made his debut on the big screen with his cameo role in the Afrikaans box office hit - “Susters” He is proud to be affiliated with his record label, Inhoud Huis Musiek, and is currently working on his brand new album with Johan Vorster. Jo’s music can be described as Pub Rock, and Inspirational, depending on the venue requirements. Jo’s musical performance is easy listening pub music, and the inspirational songs will leave you with a smile, and wanting more. Jo believes that your life can change in an instant, if you want it to.